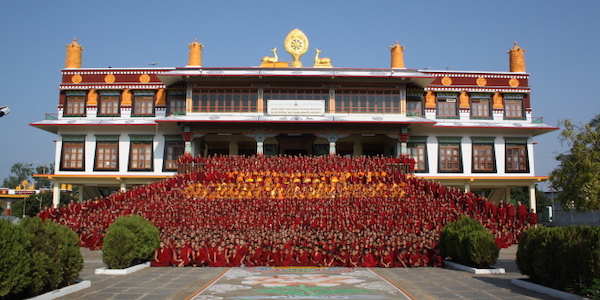 Drepung Monastery was founded in 1416 near Lhasa, the capital of Tibet. Gomang Dratsang or College is the oldest of the 4 colleges of Drepung. In 1959, before the invasion of Communist China, Drepung monastery had more than 10,000 monks. Gomang alone had about 5,500.

Since its beginning, Gomang College has produced many eminent Buddhist masters and has been a very important Tibetan and Buddhist learning center. Each of the colleges of Drepung has its specialty and the focus of Gomang is philosophy: logic and debate.

In 1949 while the Chinese Communists were attempting to establish control of the Far East, we fought the Korean War to stop this domination. At the very same time, on the other side of China, the army of the People’s Republic of China invaded the county of Tibet. No one came to the aid of this sovereign territory and by 1959, the political and spiritual leader of Tibet, Tenzin Gyatso, the Fourteenth Dalai Lama was forced to flee his country.

He was immediately followed by 80,000 refugees. Refugees continue to stream from Tibet, often at great peril to their lives. All told since 1949 more than 1.2 million Tibetans have died at the hands of the Communist Chinese. 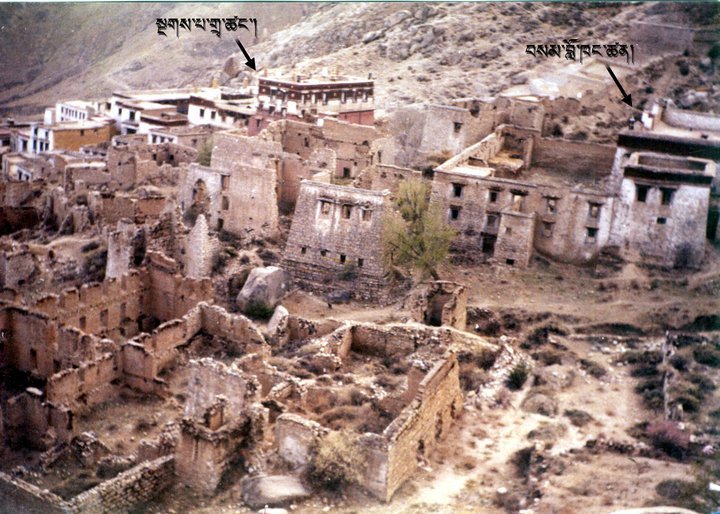 The Ruins of The Original Drepung Monastery

These oppressors are destroying the environment and culture of Tibet and are displacing the population of Tibet. In many areas, Chinese settlers now outnumber the Tibetan population. The Peoples’ Republic of China is doing to Tibetans in the space of 50 years what we did to the Native Americans in the space of 500 years.

During the past forty years of their occupation, the Chinese Communists whose motto is “Religion is Poison” have destroyed more than 6,000 of Tibet’s monasteries, including Drepung, and have imprisoned, tortured, and executed thousands of Buddhist monks and nuns.

Escape from Tibet:
Only about 100 monks managed to escape with His Holiness the Dalai Lama when he fled Tibet in 1959. They lived first in Boxa, North India, and then, in 1969, 62 of the surviving Gomang monks were given 42 acres of land in Mundgod, south India. There they started to rebuild Drepung Gomang Monastic Dratsang in its present location. Today approximately 2,000 monks live on these few acres.

Location and Services:
Gomang is located in Mundgod part of a larger Doeguling Tibetan settlement of 16,000 persons. Besides the monastery, this settlement includes 9 camps for lay people, a Central Tibetan Administration office, 1 school for lay Tibetans, a hospital, a medical center, a nunnery, old persons home, a bank, a café, and a guest hostel.

Gomang Monastery interacts with the larger Tibetan community, teaching the three R’s in the school, assisting in the hospital, Old Folks’ home, and providing training in Tibetan Arts and Crafts for the young people of the settlement while offering employment for the local Tibetan and Indian people. In addition, of course, the monks perform religious ceremonies for the Tibetans. All of these services are performed at no charge to the Tibetan Community.