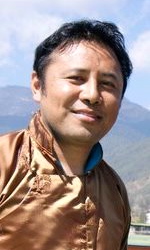 Tenzin Namgyal (Tenam) serves as Geshe Rapgyal’s Tibetan to English and English to Tibetan interpreter for all Dharma classes.

As Buddhism spread from India to Tibet, translators/interpreters played an extremely important role in making the Dharma accessible to students.  Historically, translators have been very learned in their own right.

His profession of translating Buddhist teachings dates to his college years when he served as an official translator for foreign exchange students mainly from the United States and Australia.

For almost three years Tenam served as resident translator at Tibetan Mongolian Buddhist Cultural Center (TMBCC), Bloomington, Indiana. During this time he translated a couple of short texts on practices (Sadhana) and Tibetan grammar texts, and also assisted interpretation and translation for the Geshes and many monks of various tour groups.