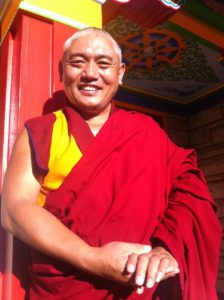 Geshe Rapgyal is the Executive Director and Spiritual Teacher of DGCEC.

Geshe Rapgyal was born on January 3rd, 1969 in Machu, Amdo. Tibet. In 1987 he entered Tashi Choeling Monastery and took novice and monastic vows.

In 1991 he fled to India. Under the direction of H.H The Dalai Lama, he was accepted into Drepung Gomang Monastery for further studies.

Geshe completed the five volumes of the Gelugpa’s dialectics curriculum, and in 2006, he was awarded Geshe Lharampa degree from Gelukpa University. The same recognition was conferred by Geluk schools Gaden and Sera.

In 2007, he enrolled at Gyumed Tantric College to study Vajrayana. He completed and took the oaths of Geshe Ngagrampa degree.

In 2009, Geshe Rapgyal was selected by Drepung Gomang Monastery to lead DGCEC. He arrived on February 26, 2010, and has been a major leader in our growth at our center. Geshe-la offers regular teachings on Saturdays and Sundays, leads day-long retreats once a month, provides spiritual guidance for sangha members, and participates in many interfaith gatherings around the city.

To schedule an appointment to meet with Geshe Rapgyal, please contact DGCEC Director, Anne Walter, at [email protected] or 502-619-1652.

Geshe Sonam, the Assistant Director of DGCEC, arrived on May 25, 2013. He had previously visited the US as part of the 2012 Sacred Arts Tour.

Geshe Sonam was born on August 13, 1975, in Amdo, Tibet. He expressed the desire to become a monk as a child. In 1987 he took his novice ordination vows (Getsul vows) from Agu Gedun Gyatso at Tashi Kyel Monastery (Tibet) where he studied elementary monastic texts.

In 1994 he enrolled in Drepung Gomang Monastery in South India to pursue further studies and to receive a blessing from His Holiness the Dalai Lama.

Geshe Sonam received his Geelong vows (Bhikkhu ordination vows is full ordination) from His Holiness the Dalai Lama in 1997.

He completed monastic classes of Tsema (commentaries on logic) and Pharchen (Prajnaparamita) in 2001, completed Uma (Madhyamika) in 2003, completed Zoe (Abhidharmakosh) in 2005, then was honored with his Geshe Dho Ram degree in 2009.

Geshe Sonam participates in daily and special rituals, serves as host for visiting retreatants, guides all upkeep of the center and provide delicious meals for the residents and guests. 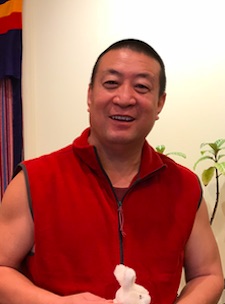 Geshe Gedun Gyatso first came to the US at a member of the 2013 Drepung Gomang Sacred Arts Tour.  He joined DGCEC as a resident monk in October 2016.

Geshe Gedun expressed the desire to become a monk as a child in Tibet. In 1995 he enrolled in Drepung Gomang Monastery in South India to pursue further studies and to receive a blessing from His Holiness the Dalai Lama

In 2003 Geshela completed monastic classes of Tsema (commentaries on logic) and Parchen (Prajnaparamita).  Gedun Gyatso was honored with his Geshe Dho Ram degree in 2009, the equivalent of a Western University Master’s Degree in Buddhist Philosophy.

At DGCEC Geshe Gedun assists with all ceremonies, shares wonderful cooking and helps care for the center’s building and grounds. 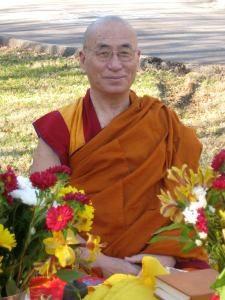 Drepung Gomang Institute, begun in 2001, was blessed with our first Geshe in the Summer of 2003 with the arrival of Geshe Sangay from Drepung Gomang Monastery.

He served the center as Director from that time until Geshe Kalsang Rapgyal’s arrival in 2010. After that Geshe Sangay served as a retired teacher in residence.

During the nearly nine years he lived at DGI, Geshe Sangay’s teachings, prayer ritual, and interfaith participation guided the members of the center and set a strong foundation for our current growth.

In June 2012 Geshe Sangay retired to the Monastery in India. His prayer and presence is missed at DGCEC.