1. Destiny Fulfilled: Je Tsongkhapa’s Education As a Song of Realization
2. In Praise of Dependent Origination

Tsongkhapa was born in 1357 in the Tsongkha valley of Amdo province in northeast Tibet. The miraculous events that occurred at his birth aroused the interest of the master Chöje Döndrup Rinchen, who had studied and lived in central Tibet and who founded two monasteries in Amdo after his return there. When Tsongkhapa was three this master gave a gift of livestock to his father and requested that he should be put in charge of Tsongkhapa’s education. At the age of seven Tsongkhapa went to live with I Chöje Döndrup Rinchen, from whom he received many teachings and tantric empowerments. Having learned to read and write with great ease, Tsongkhapa both studied and practiced meditation from a very early age. When he was eight years old he received ordination as a novice monk and was given the name Losang Drakpa.

At the age of sixteen Tsongkhapa left Amdo to pursue his quest for knowledge in central and southern Tibet, where he studied with more than fifty prominent teachers. Between 1374 and 1376 he concentrated on the Perfection of Wisdom sutras and on the five treatises of Maitreya along with the many commentaries devoted to them. He gained a rigorous intellectual training and a wide knowledge of both sutra and tantra during this period. Tsongkhapa was already determined to combine scholarship with the practice of both sutra and tantra and he continued to receive tantric empowerments from a number of important masters belonging to different traditions.

He was dedicated to developing the correct understanding of reality and at this time had a significant experience of entering a profound state of meditation during a ceremony when the assembled monks were reciting a Perfection of Wisdom sutra. He remained deeply absorbed long after the cer emony was over and the other monks had left the hall. From his twenty-second year he began to study intensively the works on valid cognition by Dignaga and Dharmakirti and was deeply impressed and moved by the efficacy of Dharmakirti’s system of reasoning.

For the next eleven years Tsongkhapa travelled from one monastic college to another deepening his philosophical knowledge and giving teachings. His main teacher and close friend during this period was the Sakyapa master Rendawa Shönu Lodrö.

At the age of thirty-three he met with the remarkable Lama Umapa, who came to Tsang with the intention of studying with Tsongkhapa. Umapa had had a vision of Manjushri, the embodiment of enlightened wisdom, which had changed his life from that of a simple cowherd. As a result of this vision he took up practices related to Manjushri and eventually experienced Manjushri’s constant presence.

Lama Umapa became Tsongkhapa’s direct line of communication with Manjushri. They spent periods of retreat together during which Umapa conveyed to Tsongkhapa Manjushri’s advice and responses to questions concerning the correct understanding of reality. Eventually Tsongkhapa himself experienced visions of Manjushri, who bestowed empowerments on him and gave him teachings.

During the winter of 1392-1393 in accordance with Manjushri’s instructions he stopped teaching and withdrew from other public activities to concentrate on a period of intense meditation. He was joined by a group of eight carefully chosen students. Living austerely, they began practices for purification and the accumulation of merit reciting purificatory mantras, making prostrations and offerings of the mandala many hundred thousand times. Tsongkhapa simultaneously continued to study the most important texts dealing with the nature of reality.

In 1394 he and the others moved to Wölka and while they were there they all experienced visions of deities associated with the practices in which they were engaged. In 1395 they decided to break this retreat to refurbish and reconsecrate a famous and venerated statue of the future Buddha Maitreya which had fallen into disrepair. This generated much interest and many craftsmen and benefactors offered their help for the project, which was successfully completed.

For the next three years Tsongkhapa and his companions continued to practice in Lodrak and then in 1397 they began a final year of retreat again in the Wölka area. In the late spring of 1398 these concerted and extraordinary efforts finally bore fruit. One night Tsongkhapa dreamed that he was present at a gathering of famous Indian masters discussing the subtleties of the Madhyamika view. One of them, who was dark-skinned and tall and whom Tsongkhapa recognized in the dream as Buddhapalita, rose and, holding a volume in his hands, approached Tsongkhapa and joyfully blessed him by touching his head with the book. Tsongkhapa woke as it was getting light and opened his own Tibetan translation of Buddhapalita’s commentary at the page which he had been reading the day before. When he reread the passage he at once experienced a seminal insight into the nature of reality, which brought him the understanding that he had been seeking.

Among Tsongkhapa’s many beneficial activities four are mentioned in particular. The first was the renovation of the statue of Maitreya and the subsequent great festival he organized during the Tibetan New Year in 1400 at Dzingji temple, which housed the statue. The second was an extensive teaching on the code of discipline for the ordained which he, Rendawa and Kyapchok Pel Zangpo gave for several months at Namtse Deng, thereby revitalizing the tradition of monasticism.

The third deed was his establishment of the Great Prayer Festival in Lhasa in 1409, beginning a tradition that has continued until now of devoting the first two weeks of the Tibetan new year, culminating on the day of the full moon, to prayers for universal well-being. Tsongkhapa donated everything he himself had received from benefactors to support this event and offered ornaments made of gold and precious stones to the famous statue of the Buddha in the main temple in Lhasa.

The fourth deed was the construction of Ganden Monasterynear Lhasa. “Ganden” means “The Joyous” and is the Tibetan name given to the pure land of Maitreya. The monastery was completed and consecrated in 1410. In 1415 special halls were built to house selected mandalas. Under Tsongkhapa’s guidance skilled craftsmen created these mandalas and images of the relevant deities, which were installed in 1417. All of this was destroyed after the Chinese occupation of Tibet in 1959.

During his last years Tsongkhapa devoted much of his energy to giving extensive teachings. He passed away in 1419. Personally and through his students he made an extremely significant impact on the development of Buddhism in Tibet and his influence extended to Mongolia and China. He wrote prolifically and lucidly on topics connected with both sutra and tantra, and thanks to his clear and elegant style these great works remain illuminating, relevant and accessible to this day.

Weekly meditation with chanting and prayers...

Please call ahead each week to confirm... 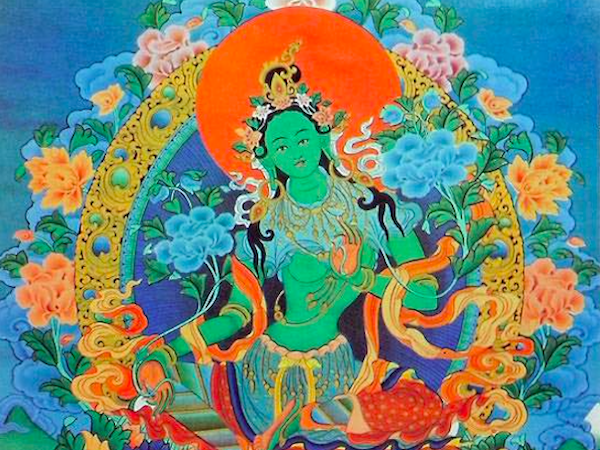